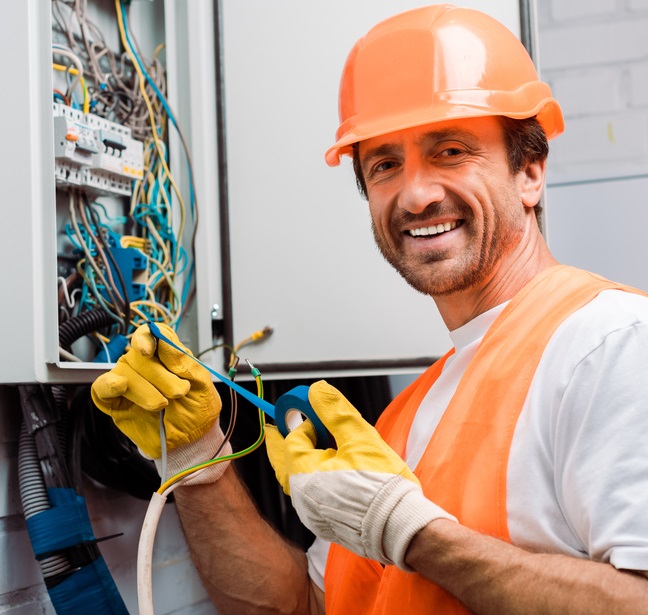 Electrician deals with installation, repair and maintenance of electrical systems. This profession requires not only mastering the ability to design according to technical standards, perform inspections of equipment or operate it, but also to learn basic terms. Here is an electrical dictionary that introduces selected topics in this field.

Electric current refers to the orderly movement of electric charges – carriers that produce an electric field. Charges can be either positive or negative. They move in different directions. A current only flows when a lower potential is applied to a conductor with a higher potential.

DC current is a direct current generated by a constant voltage source – one that does not change over time. In this case, the electrons travel at a constant speed that depends on the magnitude of the voltage and the resistance of the circuit.

An ampere is the basic unit of electric current, denoted by the symbol [A]. In the SI system, it is defined by taking a specific numerical value of the elementary charge.

A watt is a unit of power and flux, denoted in the SI system by the symbol W. One watt represents the power at which work will be done in one second. This unit is named after the British inventor and engineer, James Watt.

An ohmmeter is a measuring instrument that is used to measure resistance. These devices make use of Ohm’s law, i.e. the relationship between current and voltage on a selected element of the system. The unit used in this case is ohm, denoted by [Ω].

IP stands for International Protection. This code is used to mark electrical equipment units for information purposes, as it allows to determine the level of tightness of their enclosures. The IP scheme consists of a sequence of at least two digits and in some cases an additional two letters. The first digit indicates dustproofness, and the second one waterproofness of the enclosure, so the least protected are marked as IP00, while the highest degree of protection is IP68.

The protection class is a conventional designation for the electric shock safety of electrical equipment and components. There are four classes – 0, I, II and III. The lowest value means the least effective protection, protecting only against direct contact. Class III, on the other hand, refers to the greatest protection, in the form of a so-called touch voltage reduced in relation to the mains voltage of the current (below 50 V for alternating current and below 120 V for direct current).